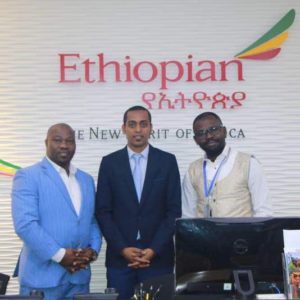 Yonas: My name is Yonas Mulu, I am stationed here in Shanghia as the Traffic and Sales Manager for the Ethiopia Airlines. Previously, I had served in Paris, for more than ten years. After then, I was posted to Shanghai where I have been for almost two years now.

BAM: Could you please briefly narrate the history of the Ethiopian Airlines, in it’s over 70 years of existence?

Yonas: Ethiopian commenced its operation in April 1946 with its first flight from Addis Abeba to Cairo via Asmara, Eritrea. The first aircrafts were C-47, which were used during the Second World War. Ever since its establishment, the Ethiopian has been focusing on Africa and becoming a pan African Airline. Our direct east-west service, linking West Africa and East Africa was inaugurated in 1961. This is the first of its kind. The next year we obtained the Boeing 720B aircraft, which is the first of its type in Africa. The following year, we inaugurated our first jet service to Nairobi. Initially, we had expertise assistance from foreign aviation experts. The first Ethiopian chief was appointed in 1971. We attracted lots of attention from the world when we got our fist boeing 767 Aircraft. The delivery flight flew from New York to Addis Ababa after 13 and half hours flights. At that time this was a world record for commercial flights. We started our first cargo service in 1989. We celebrated our 50th year anniversary in 1996 with services to Asia, Europe, Middle East and Indian Sub-continent. We started our frequent flyers programme, called Sheba miles, in 1998. The first decade of the new millennium was a period of rapid growth and expansion. The order of Africa’s first Dreamliner was made during this period, 2005 to be exact. We also secured IOSA/IATA registration for fulfilling all safety requirements. We also won prestigious awards from African Aviation Journal.

The current decade have seen even further expansion. Our second hub was opened at Lome, to serve the West African part of the Continent in partnership with ASKY, in which we are major shareholders and have a management contract with. We have also received numerous awards, “African Cargo Airline of the Year” Award on 24 February 2011; “Deal of the Year 2010” Award on 20 April, 2011;, and also named “Africa’s Most Profitable Airlines” for the third time in a row in July 2011. We also received the AFRAA Award for being consistently profitable over the years at the 43rd AFRAA Annual General Assembly held in Marrakesh, Morocco on November 21, 2011. We also agreed for Strategic Partnership with Malawian Airlines, and opening of our third Hub at Lilongwe. In 2016, we inaugurated the largest and most modern in-flight catering. Our new cargo terminal is as big as cargo terminals in Europe.

Currently we have we have five strategic business units all working towards achieving our vision 2025. Our aviation Academy is an IATA accredited aviation center. Our MRO (Maintenance, Repair and Overhaul) is also accredited by European and American authorities for its safe and reliable services. Our Cargo and Logistics Unit is the largest cargo network in Africa for the African market. Our ground service unit is providing standard ground handling services to flights operated out of ADD. Our in-flight catering unit is also revamped so as to provide best tests for our customers with the capacity of producing more than 8000 meals a day.

BAM: Ethiopia, as a nation, is globally-viewed as a poor nation. However, this fact appears contradicted by the status of the Ethiopian Airlines as a flourishing aviation giant. What, in your opinion, is responsible for this?

Yonas: It is all about past perceptions. Ethiopia has been growing rapidly for the past two decades, averaging more than 10% economic growth for the most part. The growth of Ethiopian Airlines partly relates to the growth of the Country. Another important reason is the experience and know-how of our management group. The industry is very unique and it is mandatory to have a very good management team who can adapt to social, economic, environmental and political changes in the world. I believe this is what most African carriers lack. In addition, interference by our government is almost nonexistent. This is very important if you want to run a profitable airline business

BAM: Sir, closely-related to that question is the puzzle that lies in what appears as an irony in the African aviation industry whereby many countries, supposedly richer than Ethiopia, have found it almost impossible to maintain national carriers. What would you say is accountable for this ironical situation?